You, probably. But instead of flying off into the next big adventure you’re now stuck on this shabby station. You ran out of fuel and the person who was supposed to pay you now lies under that holo-pool table in his own blood. And station security is looking for you. But don’t you worry, you’re best pal already has a foolproof plan in mind to get you both not only off the station, but also filthy rich in the process! All you need to do is convince that hooker to get that other ice-melters access card. Then it will all run by itself. Easy.

This Fiasco playset takes you to the far future and out into space. Whether it’s a small, cramped-up space station you create or a vibrant trade-port on an asteroid that even holds an artificial atmosphere, the stories they tell are alike. They aren’t about the exciting adventures of brave starship captains, witty space smugglers, or courageous heroes. Here, tired shift workers, bored prostitutes, and overly ambitious station guards stand in the spotlight. These stories are about their needs, their wants, and their poor decision making.

This playset is an accessory for the Fiasco role-playing game by Bully Pulpit Games, set in the dark future of equinox. 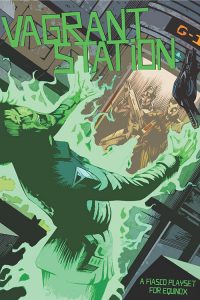