The distress beacon of the MFS Winter is calling from a deserted region of the Ceres Belt. What happened to the Vagrant freighter and what was its cargo? Was it attacked by pirates or did it encounter some other dangerous hazard? Is it a trap?

Close by lies the asteroid Tauron 5 and built on it the hidden pirate port of San Calvero. The Vagrant settlement is about to be shaken by a series of events threatening to destroy it. Is the sudden hardship just an old pirate feud boiling over? Or is there more going on behind the curtain?

Fellos Shard is an Adventure Pack set in the Equinox Universe. It contains a description of the pirate town San Calvero in the Ceres Belt, four sample characters, numerous adventure hooks, and a full length adventure covering the struggle of the Vagrant settlement and shining some light on the many secrets that lie in the asteroid’s past. 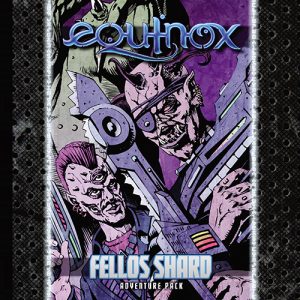 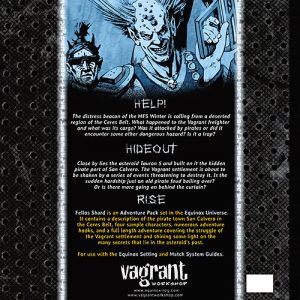